As I have noted elsewhere, there are many points of contact between The Avengers and The Champions, two British television series from the 1960s, and between The Champions and The New Avengers, which aired in the mid 1970s. In those previous blogs, I wrote about how elements of Avengers episodes are echoed in some of those from Champions, and then later how a New Avengers story echoed a Champions one.

Plots and villains and action aren’t the only places where these three series intersect, however. One important point of contact is in the character of the female secret agent. In Champions, this is Sharron Macready (Alexandra Bastedo), a medical doctor, biochemist, and agent of a private security service called Nemesis. Across the entirety of Avengers (including TNA), there were five female partners who worked with John Steed, but the one I’d like to concentrate on here is Emma Peel (Diana Rigg), since in many ways she has the most in common with Sharron.

END_OF_DOCUMENT_TOKEN_TO_BE_REPLACED 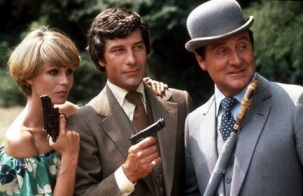 A while back I started a new blog series about confluences between the 1968 British television series The Champions and the original Avengers series. (You can find the others by scrolling to the bottom of this post or by going to the category menu and selecting Themed Blog Series: The Champions Meet the Avengers.) Soon after I started that set of blogs, I got my copy of the complete New Avengers disks (SQUEE!!!) and started watching those episodes. And what to my wondering eyes should appear but a TNA ep that had many points of confluence with a Champions story. On reflection this is unsurprising, partly because of the precedent already set by Champions in reflecting earlier Avengers stories, and partly because Dennis Spooner, one of the co-writers of the TNA episode, happens to have been one of the creators of Champions. (And now I also have the complete Champions DVDs—also SQUEE!!!—so I can make stills and gifs that actually have decent quality!)

END_OF_DOCUMENT_TOKEN_TO_BE_REPLACED

Herewith the continuation of my series examining confluences between two 1960s British television programs: The Champions and The Avengers. For the basics about The Champions, follow this link to the initial blog.

LOG LINE: A highly placed public servant breaks into a super-secure vault and attempts to take top-secret documents. He accidentally trips an alarm and is caught in the act. He can’t explain his actions because he has been brainwashed.

The beginning of the Avengers Season 4 “Master Minds”? or of the Champions “Nutcracker”?

END_OF_DOCUMENT_TOKEN_TO_BE_REPLACED

In September 1968, ITV launched a new series called The Champions, which was created by Monty Berman and Dennis Spooner.  The Champions ran for only a single season (30 episodes), and starred Angela Bastedo as Sharron Macready, William Gaunt as Richard Barrett, and Stuart Damon as Craig Sterling. Macready, Barrett, and Sterling are highly trained agents of an international security service called Nemesis. Each of them has a unique skill set: Macready is a doctor and biochemist; Barrett an expert in ciphers and codes; Sterling is a former US Air Force pilot.